Roughly a third of the food produced in the world is never eaten. There are many points along the cycle of food production and consumption where food waste occurs: it rots in the fields, it spoils during storage or distribution, it’s rejected because of its appearance, and it's wasted as we're over served in restaurants or over purchase in our homes. Up to 35% of food in high-income communities is thrown out by consumers. 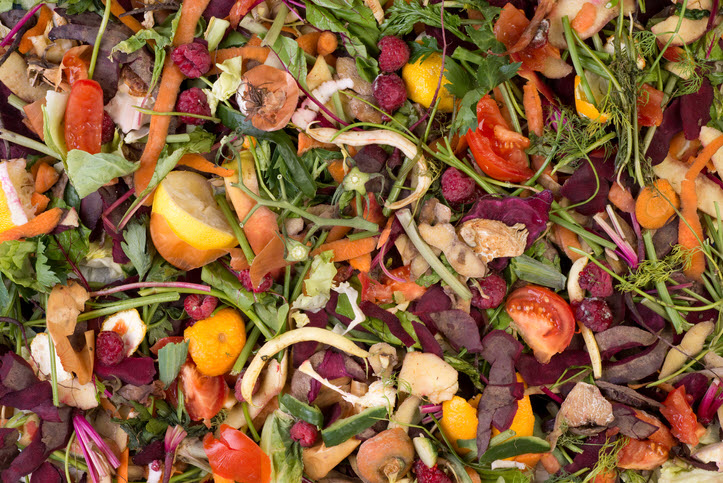 The global economic, environmental, and social costs of food waste are estimated at about $2.6 trillion, nearly the GDP of France. And of course, food waste that rots in landfills produces methane, generating about 8% of global greenhouse gas emissions. Project Drawdown has ranked reducing food waste as the #3 most important climate solution ahead of solar, wind energy, and many others. Reducing food waste also can help close the projected 60% gap between food availability and food needed by 2050, addressing the first of the United Nations’ Sustainable Development Goals for achieving zero hunger.

So what are Georgia businesses, universities, municipalities, and even airports doing to solve this complex problem?

Reducing food waste is also one of the 20 Drawdown Georgia climate solutions. At a recent webinar, five thought leaders from across the state came together to share the innovative work they are each pursuing to help reduce food waste, fight hunger, and solve for climate change. Watch the full webinar recording above, and read on to learn more.

Local Focus at Emory University
Ciannat Howett, chief climate change officer and associate vice president for resilience, sustainability, and economic inclusion for Emory and Emory Healthcare, explained that one solution Emory has chosen to focus on is prioritizing a local procurement strategy to reduce travel time, and thus waste. The campus and hospital cafeterias currently source about 40% local food, and have set a goal of achieving 75% local sourcing. Emory also manages an “ugly food” purchasing program that intentionally procures unsightly food to reduce that source of waste. Additionally, the university runs an edible food recovery program in partnership with Goodr to help enhance their food recovery program.

Emory is also working to take food waste and animal bedding to use as a feedstock for anaerobic digestion, which will produce renewable energy and healthy soil amendments that can then be used to grow more food. Emory has partnered with Chandra Farley at the Good Energy Project to craft ‘Equity by Design’ guidelines to ensure the new digester is odor-free, aesthetically pleasing, and not a cause of environmental injustices.

Goodr: Wielding Technology and Logistics to Solve for Hunger and Food Waste
In addition to acknowledging the impacts that food waste has on climate and hunger, Goodr also focuses on the simple fact that businesses are wasting money when they waste food. Founder Jasmine Crowe cites recent statistics showing that American businesses waste about 80 billion pounds of edible food annually, while at the same time 54 million people were living food insecure nationwide. Current laws allow businesses to write off up to 30% of their annual income by making food donations, but because most businesses allow food to go to waste instead, Goodr has calculated that businesses are throwing away about $40 billion in unclaimed tax incentives.

Goodr believes that hunger is not an issue of scarcity, but really a matter of logistics. Founded in Atlanta in 2017, the company is now leading the fight against hunger and food waste in 26 different markets as an end-to-end solution, helping businesses to reduce their food waste and serving as a logistical arm for providing hunger relief services. During that time, Goodr has helped clients save about $8 million in tax deductions, provided 31 million meals to people, and diverted 7 million pounds of food from landfills. The company’s value proposition is simple: when businesses reduce food waste, it’s a triple win solution that helps businesses shrink their carbon footprint, save money, and help to empower their local communities.

Food (Waste) Matters in Atlanta
As the community programs manager for the City of Atlanta, Natasha Dyer works to create programs that correct the current, mostly linear model of the food system with a circular model where excess food is ideally kept out of the waste stream altogether.

Just one example of these programs involves partnering with the Natural Resources Defense Council (NRDC) to determine how much food is going into the landfill through their Food Matters project. The goal of this project is to help cities to look at ways to build more infrastructure that will help save edible surplus food before it enters the waste stream and then redirect it to food insecure populations. The 2018 study found that 125,000 tons of food was sent to the landfill that year. As a result of this study, AgLanta Grown and the NRDC’s Food Matters project began working together to develop a more circular food system that prevents food waste, promotes recovery of surplus food, and composts inedible waste. 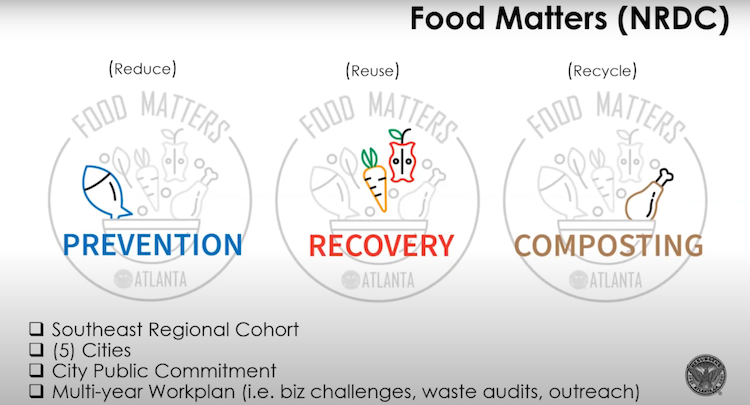 When the COVID-19 pandemic began, Dyer found that her work around food waste was elevated due to the laser focus on food supply chains. Atlanta is now working with five other cities in the southeast to support one another in crafting a multi-year work plan based on local and community solutions to food waste, leveraging shared experiences of success to divert more food away from landfills in this region and to fight hunger locally.

One example of the tactics being deployed in the city is creating a “healthy corner stores” program where neighborhood stores are supplied with surplus produce gleaned from local farms, a model originally started by the Morehouse School of Medicine. The city’s pilot program consisted of a consortium of nine farms in East Georgia. The city paid for the labor to glean surplus produce off of their farms, providing a new income stream to the farmers. The program then arranged to transport the produce to partner nonprofits in Atlanta who distributed the food to the areas that needed it most. The initial goal was to redistribute 10,000 pounds of produce in 3 months, but they far surpassed that, successfully moving 15,000 pounds in just 3 weeks. 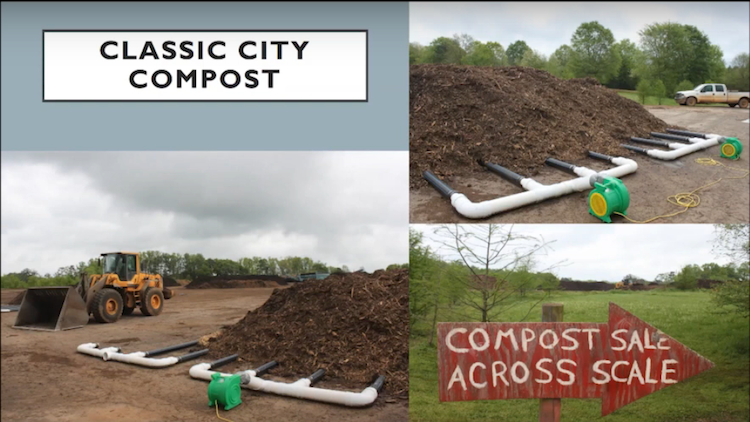 According to Suki Janssen, the solid waste department director for Athens-Clarke County, the collection of food scraps began as a pilot program after the facility was approached by the owner of a small community composting company. The owner of the company was attempting to get local compost collection off the ground, but was unable to sustain the business and suggested the county take over food scrap collection. Today, the county collects about 1,000 tons of food scraps every year, composts them with aerated static piles, and then sells the end product for $20 per cubic yard. Athens-Clarke County mainly collects compostable materials from businesses, including restaurants, hair salons, and coffee roasters, but does also have free drop-off sites for residents to deposit food scraps from their homes.

It takes the facility about a month and a half to process the compost, which is then moved and stored until it's ready to be screened to remove contaminants, including everything from metal forks to glassware. Once the compost is screened, it is allowed to cure and stabilize before being sold to a variety of customers, such as farms, golf courses, and even other landfills that want to purchase it to grow grass to prevent erosion.

Hartsfield-Jackson International Airport
In 2011, Hartsfield-Jackson became the first airport to engage in a pilot project of the Sustainable Food Court Initiative, a program that brings zero waste programs to food courts and seeks to develop best practices around sustainability. All 300 airport concessionaires were required to sign contracts committing to use compostable takeout materials to prepare for the opening of Green Acres, a site that will house recycling and composting facilities at the airport, and possibly an anaerobic digestion system as well.

Polly Sattler, the senior sustainability & resilience planner at Hartsfield-Jackson, credits the airport’s commitment to educating concessionaires as the reason why the Sustainable Food Court Initiative has been so successful. Sustainability and zero waste programs were new to many of the food businesses, but because the airport worked to engage with the concessionaires and make the connections for them, they've been able to find the products that they need to meet the goals of the initiative. 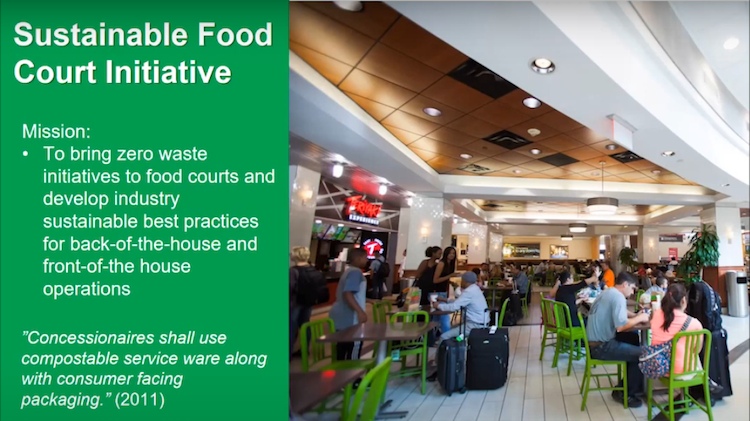 In addition to recycling food waste into compost and energy, Hartsfield-Jackson is working to recover more edible food before it enters the waste stream. In 2018, the airport partnered with Goodr on a pilot food recovery program with 20 concessionaires. Through the initial one-year pilot, over 200,000 pounds of food were recovered, 181,000 meals were served, and the airport’s carbon emissions were reduced by 167,490 pounds. The concessionaires involved in the pilot received tax benefits totaling $406,000 and 18 different organizations and charities received donations through the pilot. Hartsfield-Jackson is continuing to work with Goodr and has set a goal of achieving 100% participation from all restaurants at the airport.


Want to learn more? Watch the full webinar recording above (or on our YouTube channel), and read more about food waste as a climate solution on our website.

How Does Food Waste Contribute to Greenhouse Gas Emissions?

How to Compost at Home in Georgia