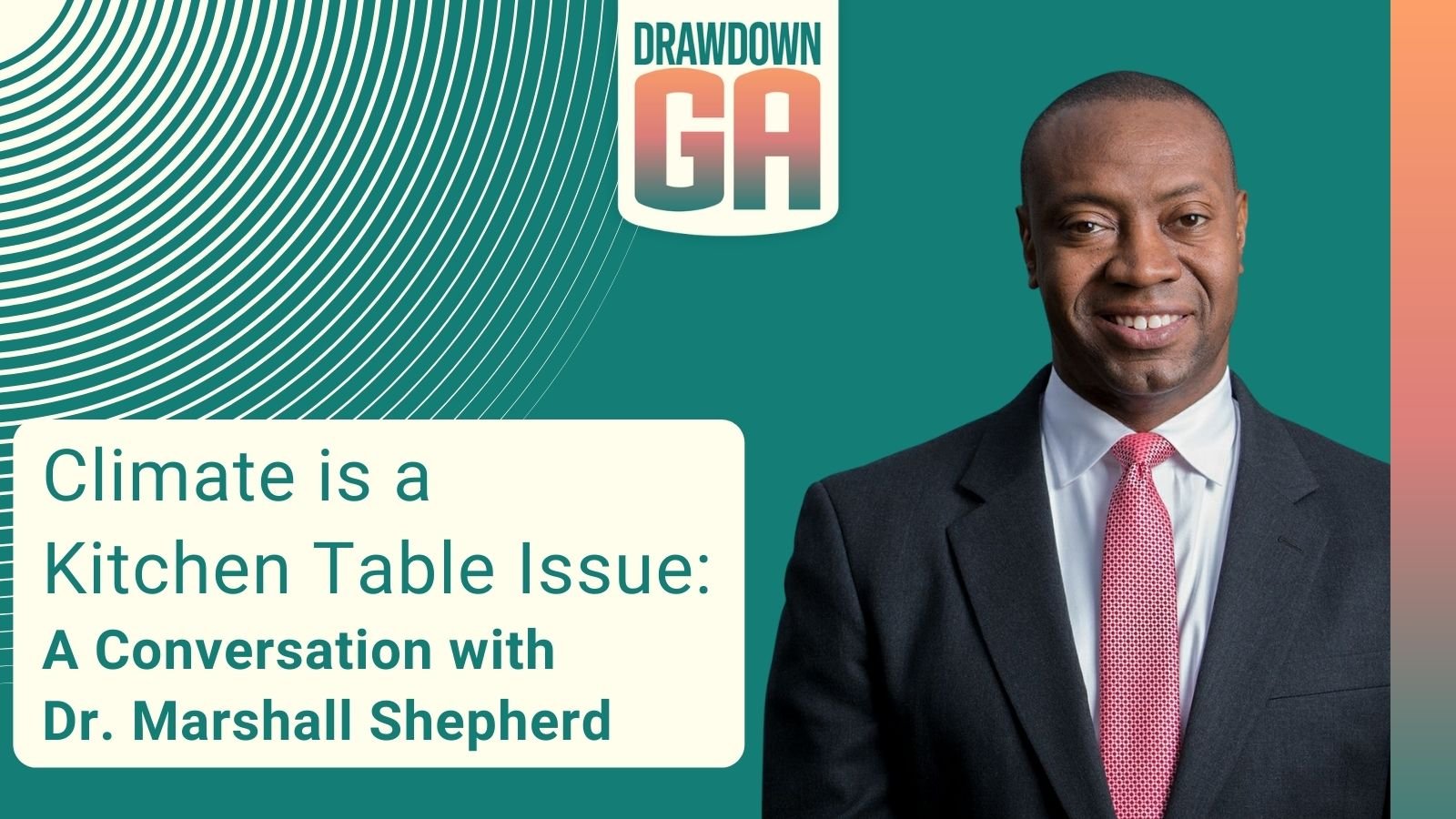 Why is climate a “kitchen table” issue that all Georgians can be motivated to take action on?

In 2020, Drawdown Georgia conducted statewide public opinion research to get a better understanding of local perspectives on climate solutions and impacts in Georgia. How have our perspectives evolved since then?

Blair Beasley, a member of the Drawdown Georgia research team and current Director of Climate Strategies at the Ray C. Anderson Foundation, recently spoke with leading climate and weather expert Dr. Marshall Shepherd about these questions and more. 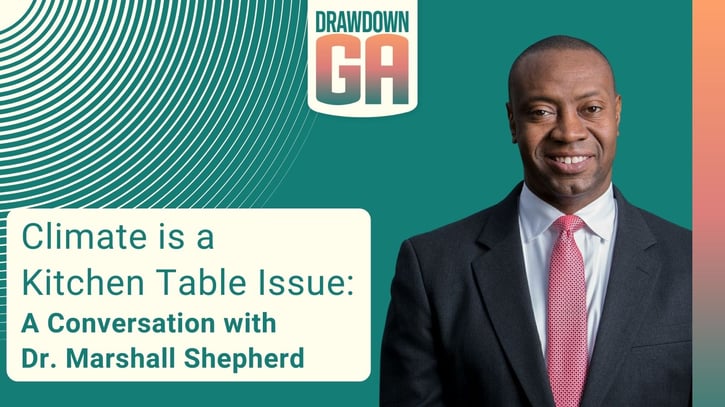 Dr. Shepherd was also a member of the initial Drawdown Georgia research team and currently serves as the Georgia Athletic Association Distinguished Professor of Geography and Atmospheric Sciences at the University of Georgia. He is well known as the host of Weather Geeks, a pioneering Sunday talk podcast/show on The Weather Channel and is a frequent contributor to Forbes Magazine.

Keep reading to learn more about Dr. Shepherd’s perspectives on climate change in our state and why the topic is a kitchen table issue. You’ll find a recording of his conversation with Blair below.

How are Georgians experiencing the impacts of climate change in our state right now?

I get a little frustrated at times when I hear people talk about climate change and they say things like, “We're going to expect this” or “We're going to see more of that.” We have to stop using the future tense. These things are here and now; they are happening right now. The scientific literature is clear that the DNA of climate change is in today's heat waves and triple digit temperatures. The literature is fairly conclusive.

The intensity of hurricanes is also increasing. Hurricane Michael devastated much of the crops in southwest Georgia, including those of some leading industry providers. So we saw a ripple effect throughout our economy.

There is the issue of sea level rise along the coast as well. If you talk to people who live in the coastal communities, they'll talk to you about levels of blue sky flooding that they're seeing. There are also concerns about the shrimping industry in those coastal regions.

We know these impacts are not felt evenly across our communities. Can you talk a little bit about some of your work and your research that looks at those disproportionate impacts?

The research is clear that because of large wealth and income gaps in this country and around the world, that there are some people who are disproportionately affected by these impacts.

We can go back to Hurricane Katrina in 2005 in New Orleans. Everybody in the Gulf Coast region was impacted by the hurricane. But there were some people in those communities who had greater sensitivity to that exposure and had less ability to bounce back from the exposure. We call that adaptive capacity or resilience.

Those people we saw in the Superdome who needed food, water, shelter, or medical care--those are the people who were most vulnerable and least able to adapt. Some of the more affluent communities were equally impacted, but they have a greater ability to bounce back. They have housing insurance. They could hop in their cars and leave and go inland and stay in a hotel for a week. Many people can't afford to do that.

So that's just an example of what I've been calling the extreme weather climate gap, which is related to the income gap or wealth gap in this country. We know elderly communities, children, people of color, and poor communities are the most vulnerable to extreme weather and climate events and often have the least ability to bounce back.

How do you think about climate solutions as kitchen table issues?

I appreciate the work that Drawdown Georgia and the Ray C. Anderson Foundation are doing to move the needle around climate solutions in our state.

And frankly, we're leading on climate both nationally and internationally. I think people are now looking to Georgia because of what we have done with things like Drawdown Georgia and the Georgia Climate Project.

When I give climate talks, people often ask me, “What can I do?”

Well, the first thing that I say is you have to be engaged in terms of being a climate voter, because we have to have large-scale change. For example, the recent bipartisan infrastructure bill wasn't a red or blue bill, it had bipartisan support.

When you think about the solutions that emerged out of the Drawdown Georgia research, there are many things that people can do in their own homes.

For example, I was just out dumping food scraps into my compost bins. Food waste is one of the biggest sources of methane when it goes into our landfills. Just think about the amount of food waste that comes out of our own homes in a given week. We can actually compost that and keep it out of the landfills and reduce that methane build-up.

>> Learn more about how to compost at home in Georgia. 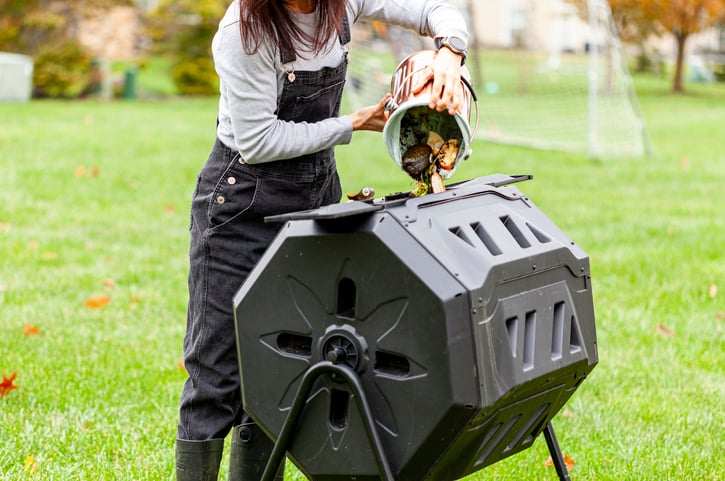 I drive an electric vehicle. Some will say they are elitist, or are too expensive for the average person or there's no access to charging infrastructure. And right now some of that may somewhat be true, but transitioning to electric vehicles, hybrids and so forth will dramatically reduce our carbon emissions. And I think EVs will ultimately offer the opportunity to advance equity as well, because of the fluctuations in gas prices. If we can move to a point where we have more people driving electric vehicles, they're shielded from these large increases.

>> Learn more about how to switch to an electric car in Georgia.

These are examples of ways that you can engage at the kitchen table on a household level. I don't want anyone to think that these individual actions alone are enough, but they certainly can help. The Drawdown Georgia effort was a really comprehensive way of thinking about large-scale solutions, but also some of these solutions that can be done at the individual household level as well.

Have you noticed a change in how Georgians are thinking about climate impacts and climate solutions?

There's still what I call the 7 to 9% dismissive crowd. The Yale Program on Climate Change Communication group does a study every year, and there is about 7% to 9% of the population that, no matter what you say, they're going to be dismissive or they're going to bring up zombie theories that have been long refuted.

So you just have to shove that noise to the side and focus on the signal, because I do believe that Georgians are coming around. I think people can see what's going on with the heat and rainstorms and hurricanes. They perceive something to be different.

What's encouraging to me is I talk to people and policymakers from both sides of the political aisle who seem to get it. I think we're starting to see a recognition that this is a new economy emerging around renewable energy. That's a shift even from five or ten years ago.

Watch the full conversation with Dr. Marshall Shepherd below. How can you take action on climate as a kitchen table issue?

As Dr. Shepherd explains, individual actions can help draw down carbon emissions not just in Georgia but everywhere. You can start by becoming a climate voter, and encouraging the people you know to consider food waste, use different modes of transportation, and even get involved in demand response energy programs.

Be sure to check out our Drawdown Georgia Climate Solutions Toolkits to learn how you can help scale climate solutions--like switching to an electric vehicle or improving energy efficiency--at home. 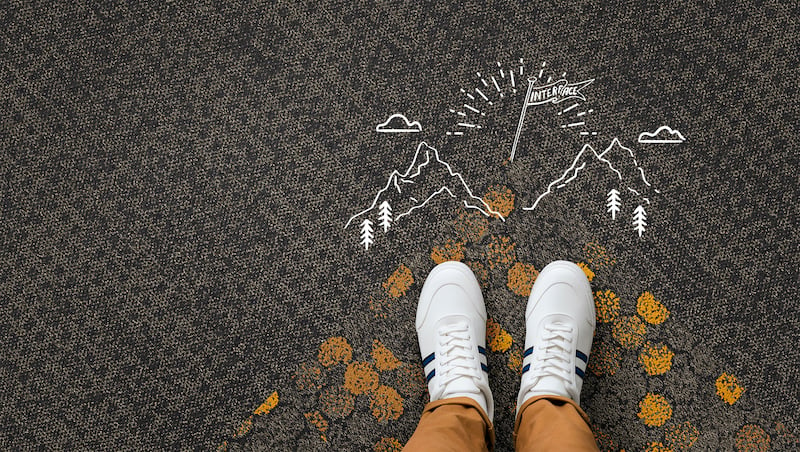 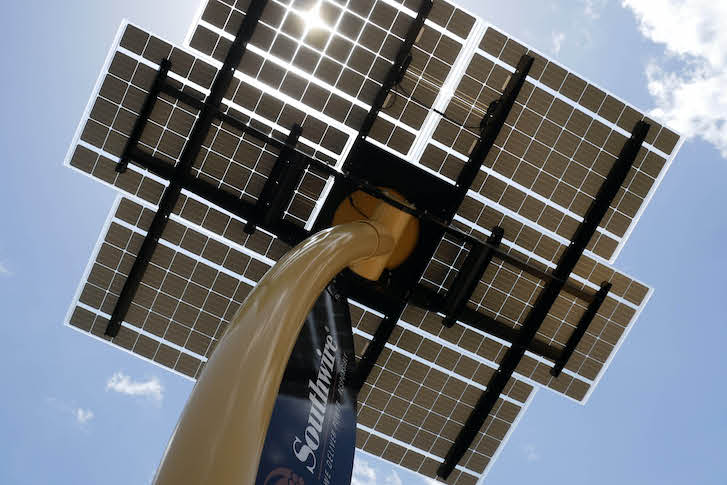 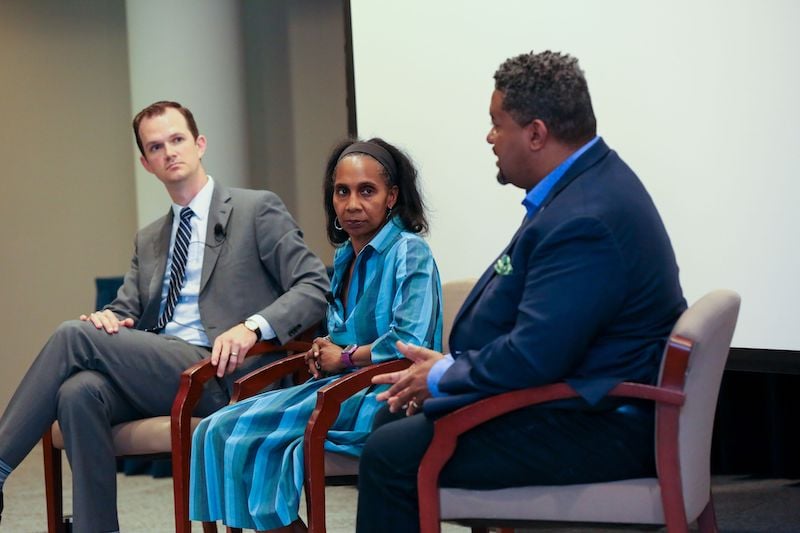